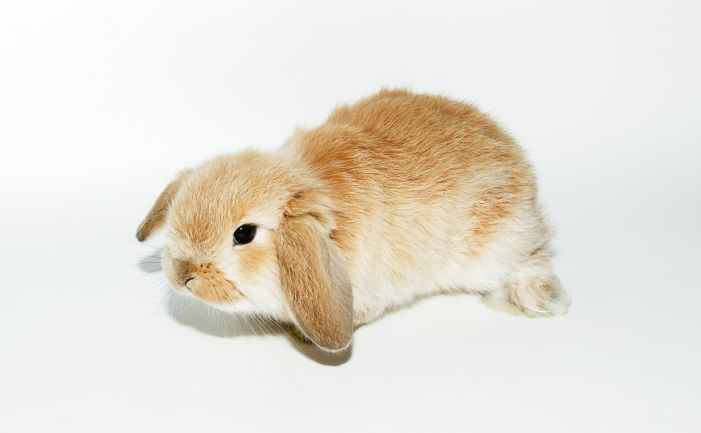 Dwarf lops and Mini lops are very similar in appearance, size being the only real difference between the two. Dwarf lops are the larger of the two and may weigh as much as 2.5 kg. The smaller Mini lop has a maximum weight of 1.6 kg. Both varieties have a dense and soft coat and drooping ears. (Lops are born with upright ears which soften and droop as they age). There are over 40 different colours and patterns in the mini and dwarf lops worldwide, however not all of these are available in Australia.

Dwarf lops and Mini lops are relatively new rabbit breeds and have only been available in Australia since 1998. The Dwarf lops and Mini lops in Australia today have been bred from rabbits which originated in America and England and arrived via breeders in New Zealand. They have been developed from the Lop which is one of the oldest rabbit varieties. The term “Lop” stems from the characteristic ears of this rabbit which are extremely long and wide and hang either side of the head, touching the ground.

The Dwarf lop was the first of the two varieties to be developed. This was achieved by introducing the dwarf gene to the French Lop rabbit. The Dwarf lops were then further dwarfed to produce the Mini lop.

Most rabbits get along fine with other pets, such as guinea pigs, if introduced properly. The Dwarf lop and Mini lop are no different. They were developed with the intention of creating a rabbit which was easy to handle and hardy enough to withstand cuddling from children.

Never lift a rabbit by the ears. Instead, place one hand under its front legs and the other hand under the bottom and lift holding it firmly and supporting its body. If held firmly the rabbit should feel secure and not wriggle. Never allow children to grab the rabbit, run with it or rough it up.

Most problems relate to inadequate diet. Ear mites are common. Mosquitoes and rabbit fleas can carry myxomatosis, a fatal disease which cannot be vaccinated against in Australia. Screen hutches and use flea powder if exposed to wild rabbits. Rabbits can be vaccinated against the Calicivirus (Rabbit Haemorrhagic disease) if this disease is considered to be a problem in your area. Rabbits are susceptible to extremes of heat or cold, especially if kept permanently outdoors. ‘Snuffles’ is the term given to a common infectious respiratory disease (Pasteurella multocida) seen in rabbits which are kept in draughty or poorly ventilated conditions. Other diseases to look out for include Coccidiosis (a protozoan parasite in the liver or intestine), Enteritis (a potentially fatal condition caused by sudden changes in diet).

Commercial rabbit pellets are sold by most pet stores and produce merchants. Half to three quarters of a cup of pellets should be given once a day only as unlimited access to pellets can lead to obesity. It is essential that fresh water is always available. Vegetables such as cauliflower, parsley, spinach, corn on the cob and carrots, (but no lettuce) can be offered weekly. Hay and straw should be provided daily. If possible, move the hutch around the lawn to provide fresh grass but avoid any grass which has been sprayed with herbicides.

All rabbits should have an area in which to exercise outside their hutch. The lop is not a very active rabbit and does not require a great deal of exercise but care must be taken that it is not overfed. Exercise will also assist rabbits to wear down their nails and to maintain body tone.

Most rabbits in Australia are kept outdoors in movable hutches made of timber or metal. These should be enclosed with mesh, and preferably with a form of insect screen to prevent mosquitoes spreading disease. One end needs to be enclosed to provide shelter for the rabbit and a hinged lid here will help when cleaning the hutch each week. Of the many commercial hutches available (ranging in price from about $80) many owners prefer timber cages as the metal versions can get very hot in summer. With this in mind, hutches should be located in a sheltered area of the yard in warmer months. It is very important that the hutches are secure against attack from cats, dogs or foxes.

Breeders say rabbits can be toilet trained to use litter trays but avoid using clay-type litters as these can cause digestion problems if nibbled. The biggest problem caused by rabbits roaming free inside the house is biting through electrical cords so homes should be bunny-proofed before release.

Dwarf Lops and Mini Lops can currently command high prices as they are a relatively new breed. Prices vary from state to state. Expect to pay from $30 for a pet, up to $90 for a show quality rabbit. Once purchased, they do not cost much to feed.

Dwarf lops and Mini lops don’t need much grooming, just a brush through the coat once a week. As they grow, they will gradually lose their baby fur and acquire an adult coat. It may be necessary to groom them with a wire brush to remove patches of fur when they moult. It is important to remove moulting hair as Dwarf and Mini lops can die if they ingest too much hair.

Mini lops may have between 1 to 5 babies per litter. Rabbits can be desexed for about $100 (roughly the same as cats) and this is recommended for pets. Otherwise, with more than one rabbit and only a rough idea of sex identification, one doe (female) could produce 50 kittens annually.

Rabbits are primarily companion animals. Rabbits are pets which can be cuddled, brushed, housetrained, are clean and relatively cheap to feed, don’t kill wildlife, and fertilise the lawn.

While it’s still illegal to keep a rabbit in Queensland unless you are a magician, most other states will allow them as pets. Some states may require a permit so please check with local authorities for your own special requirements.

The mini and dwarf lops are a good size for children and have a better temperament than the dwarf rabbit.

To purchase from a shelter