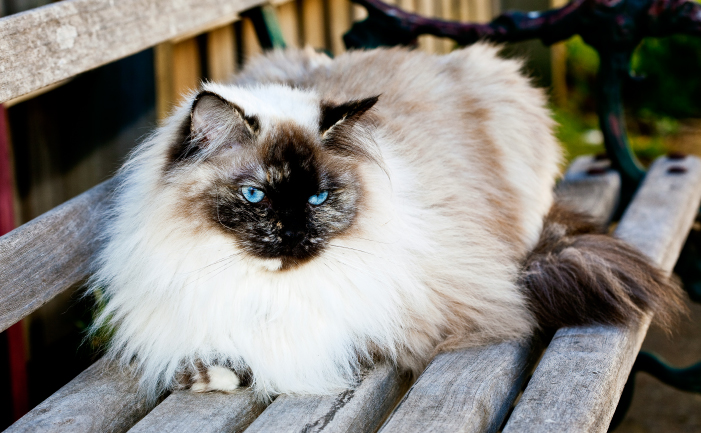 Ragdolls are a relatively new breed, developed in the early 1960s in the United States. The Ragdoll is likely the result of crossing several breeds over time; breeders speculate that Persian, Birman and Angora breeds played a dominant role.

Ragdolls were recognised as a breed in the United States in 1967 and in Australia around 1990. There are breeders in all states of Australia, however Queensland claims the dominant share. The Ragdoll derived its name from its habit of going limp when handled. This is usually when the cat is happy and content or when it would rather be put down. There are currently no registered Ragdoll clubs in Australia.

The Ragdoll is a large, heavy cat. Fully mature males can weigh up to 10 kg or more. Females will weigh about 8 kg. They are a semi-longhaired breed, with Siamese-like colourings, and although not possessed of a thick undercoat (like the Persian) they do retain a soft, silky outer coat. Another distinctive feature of the Ragdoll is its large, oval and rich blue eyes – very striking.
The Ragdoll coat appears in four colours; Chocolate: light brown, almost tan extremities (called points). The torso may become a biscuit colour as the cat matures. Seal: a very dark brown approaching almost black. The points are very dark. Lilac: pink and grey colours blending to a mauve hue on the tail, legs, ears and face. The nose and paw pads are also a blend of pink and grey. As the cat matures, the coat may develop into a champagne colour. Blue: about five shades are possible dependant on what colours the parents are. As the cat matures, the colour may develop a soft, bluegrey hue.

Laid back and quiet with a very placid disposition. Although not a skittish cat, Ragdolls do have their active moments and enjoy a play. These cats however don’t display strong hunting instincts and are happy to lounge around waiting for some loving attention. Ragdolls aren’t a demanding cat and are not regarded as a vocal breed like Siamese. Tolerant of children and strangers, the Ragdoll makes an ideal pet for owners who have visitors or children dropping by.

Ragdoll breeders suspect that the breed may have a genetic predisposition to Cardiomyopathy or ‘Big Cat Syndrome’. A condition which affects the heart muscles, it is a progressive disease and is invariably fatal, with death usually occurring within a year of development. Instances of polycystic kidney disease have also been known to occur. This is a heritable disease in which the kidneys become filled with fluid. Tests are available for this disease, so if you want trouble free kittens, make sure the parents have been screened and passed prior to breeding. Ragdolls, as with all cats, are also prone to gingivitis. This is usually due to poor diet. To overcome this problem, supplement the diet with foods such as raw chicken necks. A yearly visit to the veterinarian is advised.

Healthy Ragdolls will live up to 15 years.

Ragdolls are often referred to as ‘apartment cats’ and don’t require the outdoor life like other breeds. Breeders say the semi-longhaired coat is resistant to matting, though does moult continuously. A brush every third day will suffice. Ragdolls will also moult heavily once yearly and will require grooming daily.

Someone who wants a companion cat that isn’t demanding or high maintenance. Ragdolls are ideally suited to a small home, or for people who love the longhaired look without wanting to devote too much time to grooming. The Ragdoll’s temperament also suits it to those environments where visitors or children may be coming and going.