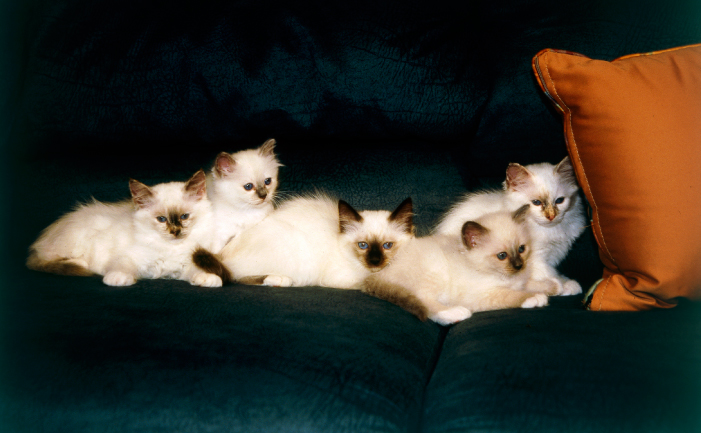 According to Buddhist legend the Birman breed was created by a Burmese goddess. The legend tells of a colony of white cats living in a Burmese temple dedicated to a goddess. After a temple priest was murdered, one of the white cats faced an effigy of the goddess, who magically transformed the cat, and all of the other temple cats, to a golden colour.

The story may be mythical but the Birman is considered to have originated in Burma, developed by Burmese priests. When the priests were forced to flee their native country they were assisted by the English and French military. In gratitude a pair of Birman cats were sent to France as a gift and the female of the pair was pregnant. Since the early 1900s,

following the Birman’s arrival, the breed has continued to be developed in Europe and has spread around the world. The Birman were introduced to Australia in 1967.

The Birman is a most attractive cat, exceptional to look at and very photogenic. They are a semi-long haired cat breed that are broadly similar in colour to siamese cats except that the tips of their feet are pure white. The cats have markings i.e. darker colouration on the face, ears, legs and tail. These areas are known as points. Regardless of body or point colour, the cat should always have deep blue eyes and white feet. The white feet are known as gauntlets and, for showing, should be as symmetrical as possible. On the front feet the gauntlet should end in an even line and go no higher than the ankle. On the back feet the gauntlet should cover the entire foot and taper high up the back of the leg to the hock. The coat should be long but nowhere near as long as that of a Persian. There should be an obvious ruff or collar of hair around the neck, especially in the males. The tail is also bushy and the body is robust with shorter solid legs and a medium sized tail. Over the last five years several new colours have become available in this breed. The red, torti (tortoise-shell) and tabby points are new and the lilac remains rare. Birman colours include Seal, Blue, Lilac, Red, Cream, Chocolate, Seal Torti (female only breed), Seal Tortie Tabby, Blue Tabby, Seal Tabby.

Birmans are known for a cool but affectionate personality. They often appear docile and casual, and spend a lot of time lazing around the house. They form a bond with their owner and are reportedly good with other pets. They are not particularly vocal but will make their presence felt if they want attention.

The coat needs quite a lot of care with two or three brushes a week. A bath at the end of every season is enough to rid the coat of old hair. It is also important to watch the type of kitty litter used. Some cheaper products will stain the light coloured body hair. Ungroomed cats can finish up with knotted coats that require veterinary attention.

Birmans are a robust breed with no real health problems although, like most long haired cats they are subject to hair balls. A little oil with their meal will help prevent problems. Dr Rob Zammit recommends feeding cats small raw bones (such as raw chicken necks or wings) from an early age to help keep their teeth free of problems. Note: Do not feed cooked bones to cats or dogs. Birmans will usually live between 13-15 years.

The Birman has proven to be suitable for anyone. They can be kept in apartments or houses, big or small. Birmans are not as active as some other breeds, which can may make them more suitable for a busy household or one with multiple pets.

There may be waiting lists for kittens as most Birmans only produce three to four kittens in a litter. A vaccinated and microchipped Birman will cost about $480.

We filmed our segment with Bambi Edwards who has been breeding Birmans for three years. Bambi can be contacted at: