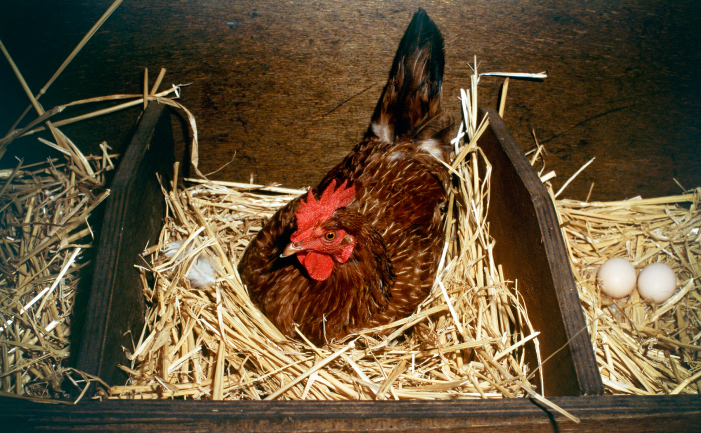 A lemon tree, a barbecue, and a couple of chooks scratching about is what makes an Australian backyard feel like home. Chooks make wonderful pets and contribute to the household. They reduce compost, are keen gardeners (in both consuming pests and providing manure) and they can keep your family and friends well stocked with free-range eggs.

Chooks don’t usually lay every day although some hybrid fowls may come close. A reasonable yield is 250 eggs a year, or at most, about four eggs a week per chook.

Of the endless list of chicken breeds, two groupings can be made: those birds which most people would recognise (Rhode Island Red, White Leghorn, Light Sussex) and those which are a bit unusual, but just as rewarding to keep. Burke’s Backyard looked at three of the more exotic varieties with Megg Miller, editor of Australian Poultry magazine.

The Welsummer breed originated in Holland around the turn of the century, and was produced by crossing local red-brown land fowl with several pure breeds. Named after a small village in the north west of the country, the Welsummer was first developed to export brown-shelled breakfast eggs after world war II. It is best suited to cooler areas south of Sydney.

Welsummer hens weigh about 3.2 kg (7 lb), and look and feel like a utility bird. They are a glossy black-red, similar to the jungle fowl.

The Welsummer is kept for its large brown eggs, and some hens produce eggs over 70g (24 ozs). Due to the tendency towards high egg weights, a Welsummer hen will lay around 160 eggs a year. Welsummers are classed as a non-sitting breed and rarely display broodiness.

The Barnevelder is named after a small town in central Holland, where it originated during the late 19th and early 20th centuries. It has a reputation for being a hardy and active farm bird.

The Barnevelder is a medium sized bird, with hens weighing between 3.2 to 3.6 kg (7-8lb). It has an upright carriage, a graceful long neck, a high-set saddle and a full tail. The feathers are dark brown, with black lacing. Black, partridge and silver varieties are also recognised.

The Barnevelder produces dark brown eggs. Broodiness is uncommon in the breed. Chicks are shy, and susceptible to being bullied by other breeds. The chicks do best if allowed to run in small numbers.

The Ancona is one of the most underrated pure poultry breeds. With its origins in Italy, this hardy breed was named after a sea port, but discussion continues over whether the Ancona is a distinct breed or part of the Leghorn family.

A small bird (hens are 2.7 to 2.95 kg[6-6.5lb]), the Ancona has a broad compact body, and beetled green black feathers, alternately tipped with white. It has yellow legs, evenly mottled in black.

Anconas produce large white/cream-shelled eggs. Pullets are regarded as early maturing, and those bred in August-September will often start laying at 18 weeks.

Backyard chooks need a constant supply of fresh water and a diet of appropriate poultry pellets, supplemented with kitchen scraps. They need a dry enclosure and protection from predators such as cats, dogs and foxes.

Worms can be indicated by diarrhoea, weight loss and a drop-off in egg production. While uncommon, it is best prevented by worming three to four times a year with a product such as Nilverm Pig and Poultry Wormer. Mix as directed with the drinking water, with an inducement, such as honey or catfood.
Vets recommend a drug called Ivermectin to treat lice and mites which is added to the water as per instructions. It is also important to thoroughly clean the pen to remove mites. If condition persists seek veterinary advice. Ivermectin can also be painted on to treat scaly leg disease and is available from stock and station agents or vets.
Scaly leg disease is a parasitic infection, treated by the suffocation of parasite. Brush the chookâs legs with liquid paraffin or old sump oil. The treatment should be repeated once or twice at weekly intervals.