Fact Sheets » In the Garden » Trees and Palms » Red-flowering Gums 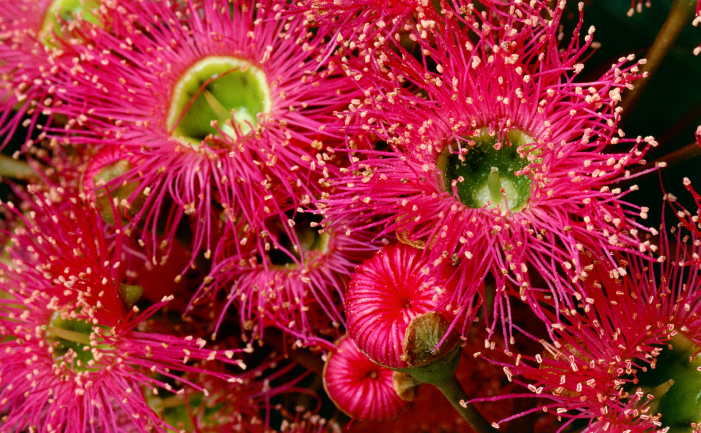 This is an evergreen tree which grows to around 10m (30′) tall. In late spring or summer large clusters of scarlet to orange flowers appear, followed by big, urn-shaped, woody fruit. These trees will grow in most areas of Australia, except for tropical and mountain zones. Some of the finest examples Don has seen are growing overseas, on the sand plains around California. Red-flowering gums are ‘second line salt tolerant’, in other words they do well in warm, coastal situations a few kilometres inland from the seafront.

Hybrids between the West Australian red-flowering gum (Eucalyptus ficifolia) and the swamp bloodwood (E. ptychocarpa) have been bred specially for the home garden.

They produce masses of flowers in summer, and in time may reach about 8m (25′) tall. ‘Summer Beauty’ has musk stick pink flowers, and ‘Summer Red’ has cerise red flowers. Both trees have attractive bronze coloured foliage. These hybrids are grafted, so when you buy one you know exactly what colour the flowers will be. They attract birds and bees, they grow in a wide variety of habitats and soils, and they are drought and frost tolerant once established.

These large lorikeets have blue heads, orange breasts and brush-tipped tongues for gathering nectar from flowers. Their natural range extends from Broome in Western Australia, over to Queensland, down the east coast and round to Kangaroo Island in South Australia. Escapees from aviaries have also settled happily in Perth.

Rainbow lorikeets have benefited enormously from contact with humans, and they are much more common now than they used to be years ago. This is because homeowners have been feeding them, and also because nectar-bearing plants, such as bottlebrushes, have been planted in so many home gardens. Burke’s Backyard recommends that you attract native birds to your garden by providing them with food, shelter and water.

Check with your local native nursery. If they don’t have red-flowering gums in stock they will be able to order them in for you. Grafted plants in 200mm (8″) pots cost around $30.

Red-flowering gums are featured in the March edition of the Burke’s Backyard magazine, available at newsagents for $4.60.