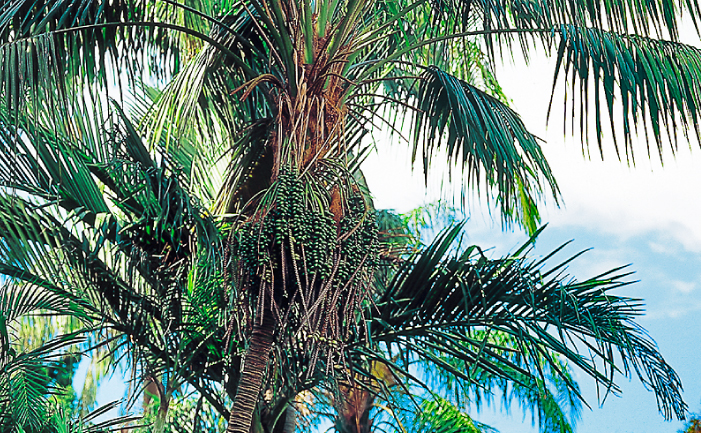 The kentia palm (Howea forsteriana ) is one of the most beautiful palms in the world, and is suitable for growing either indoors or outdoors. An Australian native palm, the kentia has been grown in Europe since the 1850s. During the 19th and early 20th century it was a fashionable plant used for interior decoration (the palm of the popular Palm Court Orchestras). Today it continues to be highly favoured as an indoor plant and is grown around the world.

Occurring naturally on Lord Howe Island, from where it derives its genus name Howea, the kentia palm has a slender trunk and a graceful crown of dark-green drooping fronds. The trunk can grow 5-15m (15-50′) tall, but in an open position (such as in a garden) rarely grows more than 4m (12′) tall.

On Lord Howe Island kentia palms grow in dense colonies in sandy soils close to the sea. Elsewhere they grow well in coastal areas, from the northern sub-tropics south to Melbourne. They can be grown almost anywhere as an indoor plant.

Kentia palms prefer well-drained soil that is rich in organic matter. Mulch around the plants or encourage the natural mulch of fallen fronds to collect. Fertilise at least once a year and water regularly, especially during dry periods. Water indoor palms more sparingly, watering only when dry. Kentia palms will tolerate mild frosts. Direct sun can burn young plants so give palms some protection until they are about five years old.

Kentia palms will grow slowly in a tub for many years. To keep plants in the same container, replace old spent soil with new potting mix from time to time. The kentia palm will withstand quite dark and dry corners of your house, and will tolerate a degree of neglect. However they grow best with good light and regular care.

Kentia palms grown as indoor plants benefit from regular spells outside in a shady, moist position. Such a break will allow rain or hosing to wash the dust from the palm