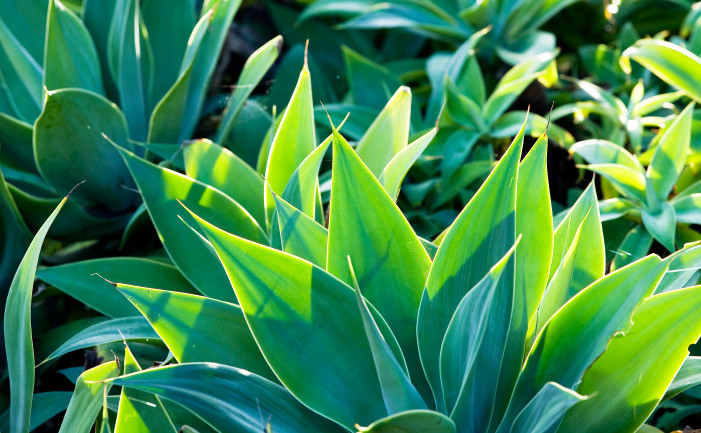 If you want bold, architectural plants in your garden, Peter Valder thinks that it’s hard to go past agaves. This fascinating group of perennial succulents occurs naturally in southern USA and Mexico. There are over 300 species, and many have dramatic, sword-shaped leaves with sharp teeth on the edges and fierce spines on the tips. Agaves produce tall flowering stems, but they can take from about 5 to 40 years to do so, depending on the species. In our segment Peter looked at some of the most popular garden varieties.

Agave americana  (Century plant)
This plant probably originated in eastern Mexico. It has grey, sharp-tipped leaves which form rosettes about 1.8m (6′) wide. Its common name is ‘century plant’, due to the mistaken belief that it only flowers once every 100 years. In fact, it produces pale yellow flowers on a very tall, branched stem when it is about 10 years old. Several varieties of A. americana are available, including:
‘Marginata’ – yellow stripes down the sides of the leaves
‘Medio-picta’ – a broad, yellow stripe down the middle of the leaves
‘Striata’ – yellow stripes on the leaves

Agave angustifolia  (Narrow-leaved century plant)
This species thrives in the heat and needs very little water. It forms a rosette to about 1m (3′) across. Mature plants produce green to yellow flowers on a tall stem to 5m (15′). A. angustifolia var. marginata is a variety with white stripes down the sides of the leaves.

Agave attenuata  (Fox tail agave)
A spineless species with rosettes of soft, greenish blue leaves. When the plant is 10 years old or more it produces a flower stalk to 4m (12′) high, with yellowish drooping flowers. After flowering the mother plant dies and offsets, or pups, take its place. This species grows well in the ground and also in pots.

Agave victoriae-reginae  (Queen Victoria agave)
A slow-growing, stalkless succulent from Nuevo Leon, Chihuahua, in Mexico. It has small rosettes of thick, fleshy leaves with a thin white line on the edges. At the end of each leaf is a very sharp spine. This plant may take 40 years to produce pale green to creamy flowers on a tall stalk.

Growing agaves
Agaves are easy to grow. They like a full sun position and a well-drained, sandy soil. In gardens they are often grown as accent, border or rockery plants. (Tip: keep species with sharp spines away from paths.) Many of the smaller agaves make excellent pot plants. If growing in a pot, use a free-draining soil mix suitable for succulents. Water established plants in summer when they are actively growing.
(Note: Agaves have a tendency to become weeds in NSW and Victoria. Check with your local council before planting them.)