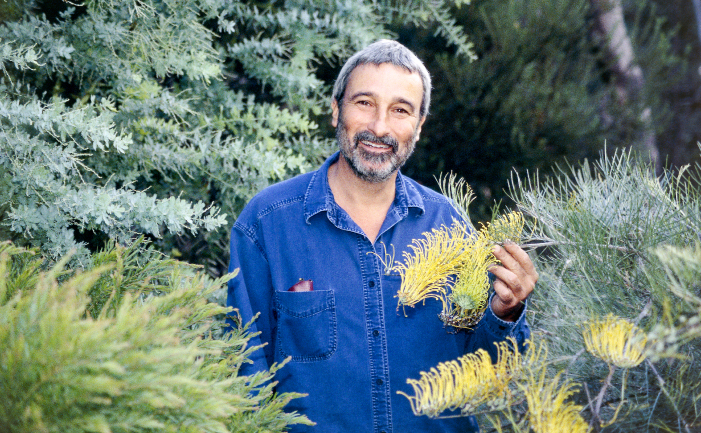 For suspicious customers afraid of evil forces, the baker added an extra loaf as ‘protection money’, giving rise to the sayings ‘Twelve for the baker and one for the Devil’ and ‘Baker’s Dozen’. On ‘Burke’s Backyard’ Don cautiously declared his baker’s dozen of best grevilleas which includes trees, small shrubs and ground covers.

Grevillea ‘Honey Gem’ – a tall growing plant (between 3-5m or 10-15′ tall) with golden yellow flowers that are extremely bird attracting. It is a tall growing, semi-tropical grevillea that is a hybrid between Grevillea banksii and Grevillea pteridifolia . Although tall growing it can be kept smaller, between 2-3m or 6-10′ tall, with regular pruning. It has flowers for most of the year.

Grevillea ‘Robyn Gordon’ – a small growing shrub (about 1-1.5m or 3-4′ high and about 1.5-2m or 4-6′ across) with red flowers throughout the year. Very popular with native birds. This variety was discovered in 1981 on David Gordon’s property at Glenmorgan in Queensland. The plant had been grown in the garden for 18 years and was named for his daughter. It is a hybrid between G. banksii and G. bipinnatifida.

Grevillea ‘Misty Pink’ – a medium-sized shrub (about 3m or 10′ high) with pale pink flowers throughout the year.

Grevillea ‘Moonlight’ – a tall growing grevillea which can grow as a small tree to about 5m or 15′ tall with soft lemon flowers. Very popular with native birds.

Grevillea banksii var. fosteri – a tall shrub (3mx2m or 10×6′) with large, blood red flowers throughout the year. One of the original grevilleas and the parent of many hybrid grevilleas.

Grevillea ‘Boongala Spinebill’ – a low growing shrub (about 1.5m or 4′ foot high and 2m or 6′ wide) with burgundy toothbrush flowers throughout most of the year.

Grevillea aspleniifolia – an elegant, medium-sized shrub (about 3 – 4m or 10-13′ tall) with narrow leaves which give the plant an open look. Dainty red pink flowers, year round but particularly in spring.

Grevillea ‘Ivanhoe’ – a hardy, vigorous medium sized shrub (about 3m or 10′ tall and 4m or 13′ wide) with deeply serrated foliage and red toothbrush flowers which peak during the warmer months. Not long lived but great for rapid privacy screening and as cut foliage for use indoors.

Grevillea hookeriana – a medium-sized shrub (about 3m or 10′ tall and 4-5m or 13-15′ wide) with dense, ferny foliage and red flowers. Excellent screening plant.

Grevillea ‘Poorinda Royal Mantle’ – this is the most successful ground cover grevillea with lush foliage and red toothbrush flowers. It will cover several metres across. A good coverage is achieved by planting at 3m centres. New growth coppery red. Available in other forms such as the excellent Grevillea ‘Jolly Swagman’, which is a seedling from G. ‘Poorinda Royal Mantle’.

Grevilleas worth trying anywhere in Australia

Note: The above grevilleas are worth trying in cooler districts in a warm spot with good drainage.

Grevillea biternata (also sold as G. tridentifera but more correctly G. curviloba) – this prostrate, fast-growing grevillea with lush foliage and pretty cream flowers enjoyed great popularity in the 1970s and 1980s as a ground cover plant. It soon fell from favour however as it has the notorious habit of sending up tall shoots. If the vertically growing shoots are not removed, the plant soon becomes a medium sized shrub, not a ground cover plant at all. As well as its erratic growth habit this plant can be short lived and may drop dead unexpectedly.

Many people feel that grevilleas and many other native plants don’t need pruning but this is not true. Grevilleas benefit from regular pruning. Grevillea specialists recommend pruning the plant in early spring and cutting it back by about one third. That is, with a plant that is about 3m (10′) tall, cut off about 1m (3′) of growth.

Old plants that are looking scruffy can be renovated by pruning in this manner. With small, low-growing grevilleas that have become scrawny it is best to simply pull them up as they can be readily replaced with a new, vigorous plant. Within six months the new plant will have become well established.

In the past some grevillea plants were not long lived in gardens although producing beautiful flowers. This was because the varieties that produced the best flowers were often weaker plants, susceptible to root disease problems. To overcome this growers have been grafting tropical grevilleas on to grevilleas with hardy roots (much in the way that roses and citrus are grafted on to hardy rootstock).

Grafted grevilleas are more expensive than non-grafted plants (around $25.00) but will last longer than varieties grown on their own roots so giving value for money.

The grevilleas in Don’s 13 best grevillea selection that do well in your local area will be available from your local nursery or any native plant nursery.

For more information on grevilleas consult:

Growing Grevilleas in Australia and New Zealand, by Don Burke, published by Kangaroo Press. (Currently out of print but try your local library.)

Leaf and Branch, Trees and Tall Shrubs of Perth, which costs around $24.95 from your local book store.