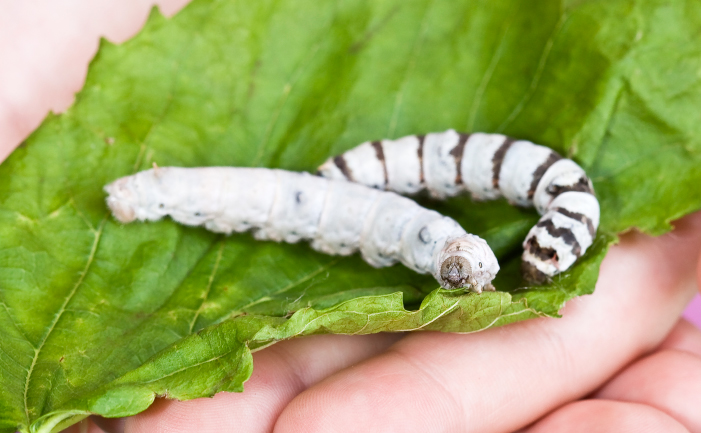 Of all the animals man has domesticated there have only been two insects – bees and silkworms. The Chinese first domesticated silkworms about 5000 years ago and for 3000 years only the Chinese knew how to produce silk. According to Chinese legend, silk was discovered when Emperor Huangdi ordered his wife Xilingshi to find out what was damaging his mulberry tree. She found white worms eating the leaves and spinning shiny cocoons. When she dropped a cocoon into hot water a slender thread of silk unwound itself from the cocoon. Then, as today, silk was a luxury item. Silk fabrics travelled the famous caravan route from China to Rome, known as the Silk Road, until 6AD when two Persian monks smuggled a few silkworm eggs out of China in a hollow walking stick.

Newly hatched silkworms look like thin pencil lines drawn on paper. Over the next four to five weeks they quickly grow into smooth, creamy white worms about six to eight centimetres long with shiny noses and yellow blood. On larger silkworms it is possible to see eight pairs of legs, claspers and a beating heart. Silkworms, like all insects, do not have lungs and breath through small holes in the sides of their body.

The silkworm is one stage in the development of the silk moth, Bombyx mori. Silkworms start as eggs. The worms grow to about 70 times their original size and shed their skin four times. When the silkworm matures it spins a fat, soft, creamy white cocoon around itself in figure eight loops for protection during the sleeping stage. The cocoon is made from one continuous thread of fluid silk, produced in the worm’s modified salivary glands, which hardens on contact with the air. During the next two to three weeks the pupa (an insect in the non feeding, transformation stage between caterpillar and moth) develops and emerges from the cocoon as a wet, bedraggled moth with six jointed legs, two pairs of wings and two feathery feelers. Once its crumpled wings have expanded and dried, the moth is a beautiful pearly white colour. Silkmoths cannot fly because their bodies are too heavy in relation to their wings. They flutter about until they find a mate and only live long enough to produce another generation. Males die soon after mating while the female dies once she has laid sticky, pale yellow eggs. The complete cycle takes two months.

The silkworm’s behaviour is principally governed by instinct, but it does have the ability to learn.

Silkworms have large appetites which increase as they grow. Silkworms never stop eating during the larval stage, cutting and slicing through mulberry leaves with their large, strong jaws. Although they can survive on lettuce leaves, lettuce alone will not enable silkworms to produce good quality silk. It is especially important that silkworms are fed mulberry leaves during their last three weeks of rapid growth. Silkworms do not need water but must be fed fresh, moist mulberry leaves daily. They will not eat wet, wilted or dead leaves. When removing old mulberry leaves do not touch silkworms because their skin is easily damaged.

Silkworms prefer a cool, dry, quiet place with plenty of fresh air. Keep the box away from direct sunlight and draughts. Cardboard boxes make good homes for silkworms as long as they are well lined with paper to prevent dampness and unpleasant odour. Silkworms will not try to escape provided they have plenty of fresh mulberry leaves but some type of cover is recommended to guard against predators such as ants and mice. If using a box, punch holes in the lid or cover with muslin for ventilation. Silkworm homes must be cleaned daily to remove any droppings and old leaves. Silkworms will suffocate if buried under rotting leaves. Breeders suggest placing a sheet of newspaper on the bottom of the box to make it easier to clean.

The female lays from 300 to 500 tiny eggs in neat little rows before she dies. The eggs hatch in spring but this can be delayed by refrigeration. While freezing destroys them, the eggs can be safely stored in the fridge for years. This means that instead of only having silkworms when they naturally hatch, you can plan for silkworm eggs to hatch during other times of the year, such as November or January. Make a note on the calender when the eggs will hatch and keep an eye on the mulberry trees and look out for silkworms.

Silkworms are usually available in the school playground from spring onwards. Other sources include school science supply catalogues, pet shops or advertising in the local paper. Prices range from nothing to 10 worms for $2. At least 10 – 15 silkworms are needed to start a collection.

Silkworms are the ideal children’s pet. They are cheap, clean, do not smell and can be kept in a confined space. Silkworms only last for a short period (2 months) so they do not create a problem for parents when children lose interest. Above all, silkworms are a great way for children to learn about insects and nature.

The thread from a single cocoon can measure 300 metres and only takes the silkworm a few days to spin. There are two methods of unwinding the strand of silk from a cocoon:

To produce an unbroken thread the pupa must be killed before it breaks through the cocoon.

1. Immerse the cocoons in boiling water for five minutes. This kills the pupa and softens the thread.

2. Find the loose end and wind it around a pencil. After about an hour the creamy white silk will show on the pencil.

To save the moth, the thread will be broken.

1.Wait for the moth to emerge from the cocoon.

3.Find the loose ends and wind the strands around a pencil.

For more information about raising silkworms or collecting silk consult:

These books are out of print but may be found in your local library.