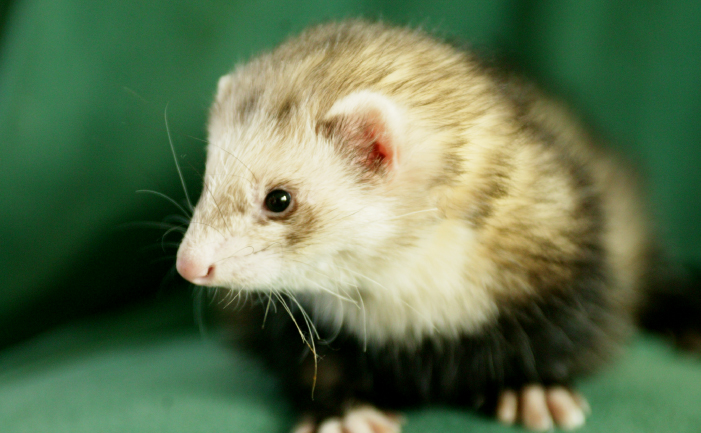 Often regarded as vicious, smelly and a downright pest, the ferret carries an unfortunate and perhaps unfair reputation.

Despite the common belief, ferrets are not rodents. The ferret is in fact a member of the weasel family, which also includes skunks and otters. Ferrets are actually a domesticated form of wild polecat, which is almost identical other than its wilder temperament.

Ferrets are a wholly domesticated species. Apart from those few that escape and manage to survive the wild, the ferret has become accustomed to, and reliant on, humans. The word ferret is actually derived from the latin word furritus, meaning ‘little fur thief’.

Little is known about the domestic origins of the ferret. It is believed by many breeders that the ancient Egyptians first domesticated ferrets to catch rodents. Introduced to Australia by the early settlers as a means of keeping rodent populations down and later for catching rabbits, current ferret numbers are not known. Several state-based welfare groups exist to care for the large number of stray and surrendered ferrets, with a view to providing them with new homes.

Ferrets have a notorious reputation of escaping from their owners. Their short legs, long body and narrow head making it ideal for allowing them to pass through the smallest of gaps. Despite this, their numbers in the wild have not risen to the stage of becoming a problem, as in other countries. This is probably due to the Australian climate and predation by cats and dogs.

So are they vicious? Ferret owners say no, at least if they are handled often and treated gently. Ferrets are in fact very affectionate, playful and intelligent. They can tolerate quite rough play with each other, nipping each other quite hard. This usually does not hurt them, and is just part of their social behaviour. But this behaviour can lead to ferrets being nippy toward humans. It is important to nip train them so they can be more easily handled and owners should be prepared to spend at least 30 minutes a day with their pet. This familiarisation is important in socialising the ferret and having it accustomed to being handled. If a ferret does nip, it should be disciplined with a loud ‘no’, held by the scruff of the neck (this won’t hurt a ferret) and given a sharp tap on the nose with your finger. Ferrets should never be hit on the head. Regardless of how well a ferret is nip trained, if handled roughly it may be easily startled and frightened, resulting in the unfortunate person being bitten.

Children should be of an age where they appreciate the need for gentle and calm handling. As ferrets are social animals, it is recommended that a pair be kept rather than a single pet. If you were to own a few ferrets, they would be called a ‘business of ferrets’.

In Australia two colours are predominant; Sable, and Albino. This white coat is probably the most common colour. Albinism is due to the expression of recessive genes which result in a lack of pigmentation in the skin. Many albinos are not pure white but have a creamy or even an orange tint. This is due to the activity of the sebaceous (oil) glands.

Ferrets are meat eaters and need a high protein diet consisting of meat or animal byproducts. A balanced diet of dried cat food and red meat such as mince is appropriate. As ferrets are prone to heat stroke, fresh water must be provided at all times. Ears need regular cleaning and nails need cutting weekly. Ferrets should be washed once a fortnight and the litter cleaned regularly.

Mature females will remain in heat until mated. This can lead to Pyometra, a condition of the uterus which may lead to death. Therefore, unless planning to breed your ferrets, desexing of both males and females is recommended. This will also reduce that strong scent. This scent is emitted from two glands located under the tail and is a defence and breeding trait – it’s not actually indicative of poor hygiene. In fact, ferrets have the same cleaning and grooming habits as the cat.

A desexed ferret will cost about $100 or you could pay $170 for a desexed pair from ferret welfare societies. Included in this price is vaccination and worming. A healthy ferret will live between 6-10 years.

As long as ferrets are let out to exercise at least twice a day, they can be housed in a clean cage inside the home. A large cage able to contain a litter box and an enclosed space with very narrow gaps between the wire is ideal. Whether they are kept indoors or outdoors it is vital that there is shelter available to escape the heat and to allow for quiet retreat when sleeping. When exercising ferrets outside they should not be left unsupervised unless the yard is ferret proofed or a fully enclosed ferret run is built.

People with time to share with their ferret friends. Families with school aged children. People who live in units.

The ferrets featured in this segment were provided by the New South Wales Ferret Welfare Society. The Society accepts stray, neglected and surrendered ferrets, with a view to rehoming. Each ferret sold is vaccinated, wormed, desexed and nip trained. New owners are also advised on how best to keep their ferret.

For details on where to find ferrets in your state contact the Petcare Information and Advisory Service on 1800 631 784 (free call within Australia).

Note: Ferrets are banned in Queensland and the Northern Territory.