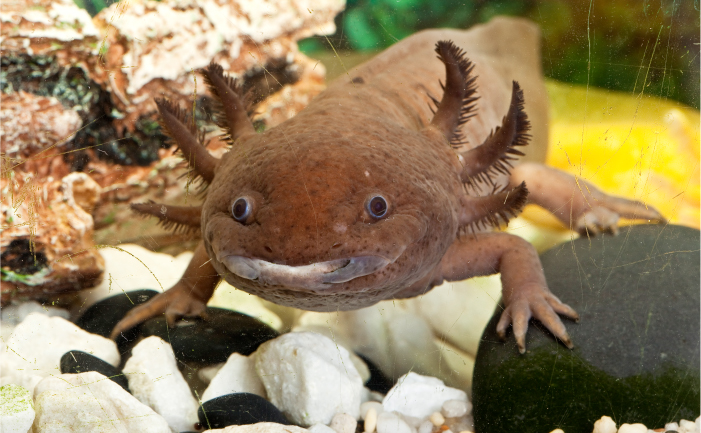 Also known as the Mexican walking fish, the word axolotl came from the Aztecs and is thought to mean ‘water doll’. Known scientifically as Ambystoma mexicanum, axolotls are in fact the larval stage of the salamander; an air breathing, land dwelling, lizard-like amphibian. Axolotl pets will usually remain in this larval stage indefinitely and are able to reach sexual maturity and reproduce.

There are two theories as to why axolotls remain in the larval state. One, that a genetic change has taken place to slow down thyroid gland activity, which restricts growth and development. In its natural habitat, it may be safer for the axolotl to live in water than as a salamander on land. The second theory is that a low level of iodine in water may also retard thyroid activity. Although it is possible in certain circumstances to promote the development of an axolotl into a salamander, it is not recommended and may actually harm the axolotl in the process.

Axolotls appear in five predominant colours; a mottled black/green is the wild type colour whilst black, gold, white and albino are also common. They have a tadpole-like appearance with a long tail. A fin runs from the back of the head to the tail and along the underside of the tail. They have four lizard-like legs and a pair of feathery gills adorn the head.

Females may be recognised by their larger, wider head. A large axolotl can grow to about 30 cm and can weigh up to 300 grams. They have poor eyesight with no eye lids and are quite sensitive to light, so remember to house them away from direct sunlight or bright aquarium lights.

Interestingly, axolotls are able to regenerate lost body parts over time. A trait which comes in handy considering their habit of nipping off each other’s limbs if they get too close!

Although very placid if left alone, axolotls can be aggressive towards each other if agitated, underfed or overcrowded. Other tank inhabitants, such as goldfish, small crustaceans and young axolotls are all potential food should they wander too close. Axolotls will snap out at anything within reach and fish may also nip at the axolotl’s gills, so it is recommended not to keep other small animals in the tank.

Although snappy, axolotls do not have sufficient sized teeth to cause their owners any harm. It is also very important not to handle your axolotl out of the water. They are strictly amphibious, a point which should be made clear to small children. Axolotls are quite happy to live a solitary existence.

Axolotls reach sexual maturity from about 12 months. If attempting to breed axolotls, ensure that the pair are in a sufficiently large tank to prevent cannibalism. There is no courting process; males release spermatophore into the water and the female may take them up, eventually laying around 200-600 eggs on plants. The eggs will hatch in two weeks but the tadpole-like young will remain attached to the plants for a further two weeks. At two weeks of age they begin to swim in search of food. Don’t forget to remove the adults from the tank as they will eat the young. Young axolotls will also eat each other and mortality rates are very high, around 97%.

It is best to feed a small amount daily, although adults can survive on once to thrice a week feedings if provided with a proper diet. Water temperature also plays an important role on feeding demands. Below 14 degrees celsius and the axolotl will need additional feeding as metabolism speeds up, not actually slowing down as with many other species. Preferred foods are earthworms, insects, small fish, crustaceans and tadpoles. These can be obtained from pet stores. If feeding live insects ensure that they have not been exposed to chemical poisons. Pelleted food which sinks to the bottom is also available from pet food stockists. As are prepared beef, heart and liver meals. It is best to feed axolotls in the evening when they are most active.

If handled too often, stressed or injured, axolotls may suffer fungal or bacterial infections due to damage of the slime-coat which covers their skin. These conditions can be treated with varying success with medications available at pet stores. Should these not work quickly, see your veterinarian for stronger treatments. Prevention is better than cure so stress should be kept to a minimum. Water temperature should remain fairly constant without getting too warm, as this may also promote fungal growth. The ideal range is 14-18 degrees celsius. Axolotls may need occasional worming, but only if they appear affected. Best indicators of this is white and watery faeces. Healthy, well kept axolotls will average 12 to 15 years but have been reported to even live as long as 25.

If housing a single axolotl, a 60 cm long tank is recommended. The minimum recommended size for a pair is 60-90 cm. Smaller tanks or circular bowls will cause the axolotl to pace, encouraging the swim bladder to develop to one side which can harm them. Plants and gravel should also be added. The gravel should be large enough to not be swallowed by the axolotl when feeding.
When setting up an axolotl tank, large pebbles and ornaments are recommended. This will encourage exercise and allow for secluded hiding spaces. Use the best filtration you can afford as this will help reduce time spent cleaning and will prevent fungal infections. As with all tanks, pH should be checked on a regular basis. Once set up correctly, the axolotl and its tank are low maintenance and make a great feature at home.

Anyone who wants something a little different should consider an axolotl. They’re very popular with teenagers and great for people who live in units or don’t have much space. As they live so long, owners often become very attached to their little slimy mates.

Axolotls range from $20 for juveniles up to $35 for adults. A standard starter set up will cost about $85, including filter pump, gravel and tank pH test kit (larger rocks, plants and other ornaments may cost extra). More efficient and preferred filtration systems can cost up to $165.

Axolotls are available in most pet stores and aquariums.

There are no specific axolotl societies however most aquariums will stock them and may be able to put you in touch with other axolotl enthusiasts. Contact your local aquarium for further details.