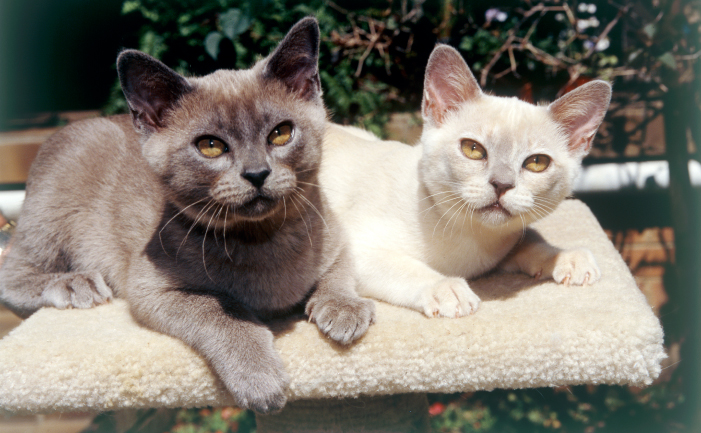 Burmese are intelligent, affectionate cats, vocal (but not as demanding as Siamese), active and playful. Burmese kittens are especially well known for their inquisitive nature. Some can be trained to retrieve toys or balls of paper. Most are outgoing and accept strangers well.

Some breeders claim the torti coloured Burmese are especially outgoing, mischievous and rascally. They have earned the affectionate nickname of naughty torties.

As there have been cases where individual Burmese have acted aggressively, reputable breeders urge prospective buyers to inspect parents of a kitten for any aggressive tendencies.

Hypokalemia is a condition when blood potassium levels drop, initially causing cramping, then paralysis. This can be treated with oral supplements. As with other Oriental breeds, lactose intolerance is common and milk should be avoided. Burmese will wander if allowed and as a result, many are hit by cars.

A varied diet such as canned food, cheese, some mince and dried biscuits should be adequate. They should not be fed solely on dry food as this may cause kidney problems.

Burmese usually have large litters, between six and eight kittens, with few problems. Kittens are born with coffee-coloured coats which then develop into the final colour.

Many Burmese will scratch the furniture if not provided with a scratching post and some breeders trim their claws. They are known climbers and a well-aimed water pistol should be used to dissuade cats from climbing curtains and furniture.

Burmese are an ideal cat for the average home or flat, although they do like room to roam. They tend to exercise adequately on their own and are not a breed which puts on weight easily.

Most Burmese make good pets for families with children but they won’t tolerate teasing. Many people living alone find the Burmese a companion which will ‘talk’ to them, however, someone who spends a lot of time away from the home should probably have two as they can be destructive if bored.

Most breeders agree that the Burmese seen in Western countries today were derived from one female, Wang Mau, imported from Burma in the 1930’s. As this was the only cat of its type in the West, it was mated to a Siamese, then the progeny mated back. The Burmese has been recognised as a breed since the 1950’s – 60’s. It is one of Australia’s most popular, pedigree shorthair cats.