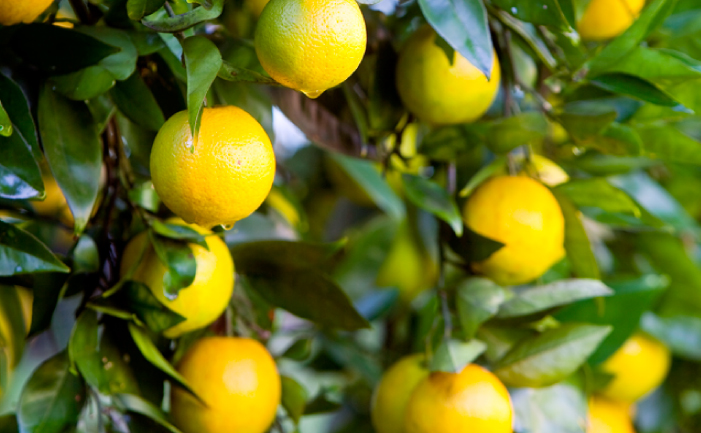 Oranges ripe on the tree.

Don Burke says some citrus trees are much better performers in gardens than others. If you want a healthy citrus tree a great start is to take Don’s expert advice and plant one of his ‘best’ varieties.

No fruit has affected civilisation as much as citrus. We drink orange juice, whisky sours (with lemon),  lime cordial, lemonade, Fanta and Cointreau. We eat lemon meringue pie, duck a l’orange, marmalade, lemon butter, orange cake, laksa, Thai red or green curry and Arnott’s Orange Slice biscuits. We season fish with lemon juice, we freshen wardrobes with pomanders, roll Jaffas down the aisle at the movies and eat oranges at half time at the footy. We burn citronella candles to keep mozzies at bay.

Citrus is in everything from disinfectants to dishwashing liquids and potpourris. Citrus oil (eg, bergamot) is a staple in many perfumes and cosmetics. And women have bleached their hair with lemon juice for centuries. The Etrog (a variety of citrus) is used by the Jews in the Feast of the Tabernacles, and the cumquat is used as the principal plant for celebrating the Chinese New Year. By now I’m sure you get it – citrus rule the world.

Citrus are the plants most taken for granted in Australia. They produce many gloriously perfumed white flowers, sport glossy, green leaves and brightly coloured fruit – yellow, orange, green and almost red. Best of all, the fruit hold on the tree in good condition for many months after ripening. So citrus trees provide long-term self-storage of fruit. Citrus fruit are rich in vitamin C and are great for winter health including resistance to colds and ’flu. They protect the family from disease but most of us hardly give them a second thought.

A bit of history

Citrus originally come from South-East Asia – the Malay archipelago and tropical Asia. The majority of the basic varieties appear to have been developed in China over the last 4000 years.

The Arabs introduced bitter oranges and lemons to Spain and Portugal during their reign there, and Vasco de Gama introduced the first sweet oranges to Portugal in 1498. Hence the plethora of Spanish and Portuguese names for citrus varieties: Lisbon lemon, and Valencia and Seville oranges.

Mind you, the Washington Navel orange comes from Brazil, the Meyer lemon comes from China, and the Emperor mandarin (full name, Emperor of Canton) comes from Australia – so names aren’t always a sure guide to a plant’s origin.

Citrus love long, sunny days, don’t love frost and demand excellent soil fertility. They grow in Melbourne but would rather be in Sydney, Brisbane or areas north. They don’t like mountains and don’t even like holidaying in Tassie.

The seedless ‘Valencia’ orange is the best orange variety for most areas of Australia. It has few or no seeds. It is a fast-growing, hardy tree. The fruit ripen early (mid-September), but hold well on the tree for many months, making it a sweeter fruit than most other oranges in cooler areas. The fruit juice does not go off and turn sour in the refrigerator like ‘Navel’ juice does. This is why almost all of the world’s orange juice production is from ‘Valencia’ oranges. Ordinary ‘Valencia’ oranges are excellent to eat as well. All Valencias grow about 4m tall. Navels grow 3-4m tall.
The ‘Washington Navel’ orange produces its superbly sweet fruit in early winter. To eat the fruit off the tree, this is the best orange of all. But:
• It is a hard variety to grow well, catching every disease around
• The fruit juice deteriorates rapidly
• It usually produces less fruit than ‘Valencia’ trees.

The cumquat is probably the most overlooked of all citrus varieties. Cumquats produce small fruits with intense flavour that should be used widely in cooking, but they are not. Forget finger limes and Tahitian limes, cumquats are a better choice. You can use the peel, zest or the entire fruit in making everything from cheesecakes to liqueurs.
Nagami: the ‘Nagami’ cumquat is the best one for eating straight off the bush, as it is the sweetest. Eat them skin and all. The fruit are oval in shape and about the size of a large olive. It’s an excellent pot plant. The tree grows 3-4m tall.
Calamondin: previously sold as ‘Marumi’ cumquat, the fruit are flattened, like mini mandarins. This is the best of all cumquats and is the nearest to the variety used for Chinese New Year celebrations. Calamondins fruit several times a year, with the main crop in winter. The bushes are dense, the best looking of all citrus in containers. This is an awesome pot plant. A beautiful variety with variegated leaves also is available. Calamondins are not quite as pretty in the ground, where they reach 3-4 m.

Eureka: the best citrus for most areas of Australia is the ‘Eureka’ lemon. ‘Eureka’ does OK in all but the coldest areas of Melbourne. However, it does hate vicious cold snaps. It produces fruit almost every day of the year. Whenever you need a lemon, it’s there for you – and lemons are certainly the most used of all backyard-grown fruit. ‘Eureka’ lemons have relatively few seeds and the trees are more or less free of thorns. This is a biggish citrus tree, growing to around 4m tall in gardens.
Lisbon & Meyer lemons: for cooler climate zones of Australia either the ‘Meyer’ or ‘Lisbon’ lemons are the preferred varieties. ‘Lisbon’ used to be the ‘Eureka’ alternative for Melbourne but these days ‘Eureka’ is preferred. ‘Lisbon’ is thorny, it does have more seeds and it fruits for many months less than ‘Eureka’. The sub-variety ‘Prior Lisbon’, an earlier-fruiting variety, is the better choice. It grows around 3-4m tall. The ‘Meyer’ lemon is a small tree around 2m tall. Its yellow fruit is gloriously smooth and relatively sweet to eat. The grated skin (zest) is of inferior quality to other lemons. Its fruit are produced for most of the year and this is an excellent variety for pot culture. ‘Meyer’ is the most cold-tolerant of all lemons.

Interest in limes has exploded in recent years, leading to a lot of new varieties, including the native finger lime and the ‘Kaffir’ lime.
Tahitian: the most popular lime is the variety called ‘Tahiti’. The fruit is a bit bigger than a golf ball, has a mild lime taste (a bit more like a lemon), no seeds and has green flesh at first. Its worst failing is that the fruiting season is very short in winter (about a month). Fruit are best used while still green to get the real lime taste. This is one of the most cold-tolerant of the limes. Due to the short fruiting season, we recommend juicing everything on the tree and freezing it in an ice-cube tray to use throughout the year. ‘Tahiti’ grows 3-4m tall.
West Indian: the ‘West Indian’ lime is the best flavoured of all, but is really only suited to the subtropics and the tropics (although it will grow as far south as Sydney). The fruit are tiny, not much bigger than a 10-cent coin, and the bush is thorny.
Kaffir: also called the Makrut lime, this is probably the best of all limes. The wasp-waisted leaves are used in Thai cooking, although you’d normally not eat them. The fruit is rough and green. The grated skin (or zest) is an excellent flavouring. The fruit itself and the juice are useless. This is an excellent pot plant. In the garden the tree grows to around 3-4 m.

There are now dwarf citrus trees available which are ideal for pot culture or small gardens. These are exactly the same as the big ones, only they grow to about half the size. They are identical because they are the big ones grafted onto a special dwarfing understock called ‘Flying Dragon’. This ‘Flying Dragon’ understock has its best effect on oranges, but all citrus are good on it. The varieties recommended and available are:
• Oranges: ‘Valencia’ and ‘Navel’
• Lemons: ‘Eureka’ and ‘Meyer’
• Mandarin: ‘Emperor’
• Lime: ‘Tahiti’

From November this year onwards, new double-grafted citrus called ‘Splitzers’ will be on sale in Melbourne and Sydney. These will be very high quality citrus matched in pairs for vigour. So, in the one plant you will get:
• ‘Washington Navel’ orange and ‘Meyer’ lemon
• ‘Washington Navel’ orange and ‘Tahiti’ lime
• ‘Meyer’ lemon and ‘Tahiti’ lime
These double-grafted citrus, and the dwarfs, are excellent space-savers in small gardens.