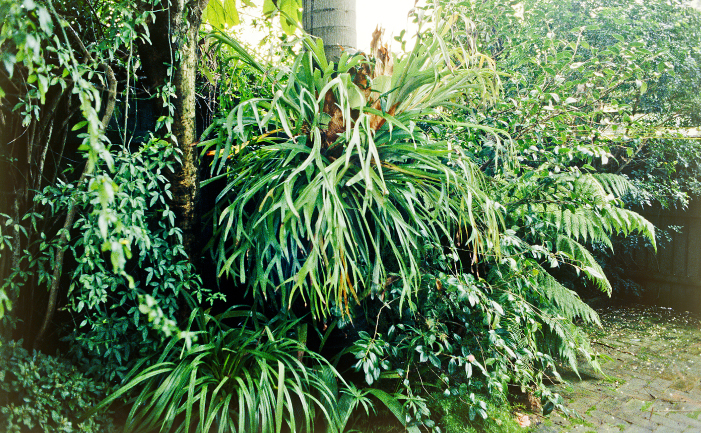 Some unusual plants to grow in your garden are the elkhorns or staghorns. The difference between these two plants is the elkhorn (Platycerium bifurcatum) has thinner, wispier leaves and multiple “eyes” or rosettes of foliage whereas the staghorn (Platycerium superbum – pronounced with the emphasis on the middle syllable) has a single eye and larger leaves. Staghorns and elkhorns are epiphytic, which means that they grow on another plant but don’t get food, minerals or water from the host plant. These plants may need to be divided every so often. Don showed us how to divide an elkhorn and place it onto a new backing board, but a staghorn could be substituted equally well.

How to divide the plant

Have a look at the existing elkhorn. Each of the eyes can form a new plant so be careful not to cut off any rosettes of foliage (unless you wish to propagate new plants) as these are the centres of growth. The fern which Don was working with could have been cut up into 10-15smaller plants, but as these would take a long time to grow, one large feature plant was preferable.

There was a natural division between several eyes and Don cut through this division with a saw (see diagram). For smaller plants a serrated kitchen knife would be suitable as these plants are easy to cut through. Trim the plant into a reasonably flat shape which can then be attached to the piece of wood.

Choosing a mounting board

There are numerous options for materials on which to mount elkhorns including compressed cork, a piece of marine ply, a terracotta pot or they can be placed onto a piece of tree fern fibre. There are several ready-made mounting boards available on the market. One is a plastic mount with a “saddle” to hold the bulk of the plant in place which Don has tested and given the thumbs up. The leafy growth eventually hides the plastic. Another mounting board was a rectangle of rubberised material which is made from recycled rubber tyres.

Don opted for making a board with five horizontal pieces of paling nailed onto two vertical backing pieces. Size can be chosen to suit the size of the elkhorn. Galvanised clouts are recommended to join the paling pieces. Use clouts which are slightly longer than the two thicknesses of paling put together. Use one clout per paling and bend the tips over with the hammer so that both sides are held together strongly.

Drill some holes through the top of the board and thread through some wire from which to hang the board.

Tip: Choose hardwood if mounting on a board, as softwood will rot very quickly.

If the elkhorn is thin (under 10cm), it can simply be nailed on to the frame. Use galvanised flat-headed nails, nailed through the centre of an old bottle top. Don’s elkhorn was too thick for nailing and was consequently wired on to the frame. Don used a roll of galvanised wire, but coat hanger wire would also be sufficient.

Tip: Take care not to put the wire in contact with any green foliage as this may result in a burnt appearance on the leaves.

Place the elkhorn on the frame with the antlers pointing upwards and then mark where the drilled holes for threading the wire will be. The wire is then threaded around the plant and poked through the drilled holes (you can also thread the wires through the board first, leaving a large loop in which to place the plant). Fasten the wire very tightly at the back of the frame using pliers, (the plant will not be damaged), but avoid any of the buds or eyes as the wire could kill these, especially if it is not plastic-coated. When the wire is pulled tight it becomes less visible and new leaves will eventually grow over the wire, hiding it completely. Pantyhose may be used instead of wire.

Once the elkhorn is tightly secured to the mount, you need to put some organic matter between the plant and the backing material. This is what feeds the plant. Potting mix, leaf litter, banana skins or compost are all good choices. It is a matter of personal choice whether the filling is placed on the board before or after wiring. The filling provides a moist area from which the plant can grow.

Mounted elkhorns can be hung on a wall or in a tree but should be in a shady place. Don suggests that they shouldn’t be mounted on to a tree. This is because the elkhorn will moisten the bark, providing a site for fungus decay and insect damage. It is a much better idea to mount the elkhorn on a piece of timber, attaching it to the tree afterwards. Elkhorns do not like too much sun, as they are used to growing under a forest canopy.

Fertilise with Nitrosol (available from nurseries or hardware stores), which is fantastic for all ferns, or take the traditional approach by using tea leaves or old banana skins stuffed down the back of the plant. These may attract a few flies, but the plant will grow to perfection.

You can mount and grow your own elks and stags or buy them ready mounted. Mounting boards range in price depending on the style.

The plastic staghorn shield with its formed pouch retails at $2.95 and is available from nurseries or from Stagmania at Grafton, NSW, 2460. Phone: (02) 6642 5262.
Rubberised mounting boards are available through nurseries and cost around $9.
Elkhorns are available through many nurseries throughout Australia. A single eye mounted on a board varies between $12 and $40 depending on the size.