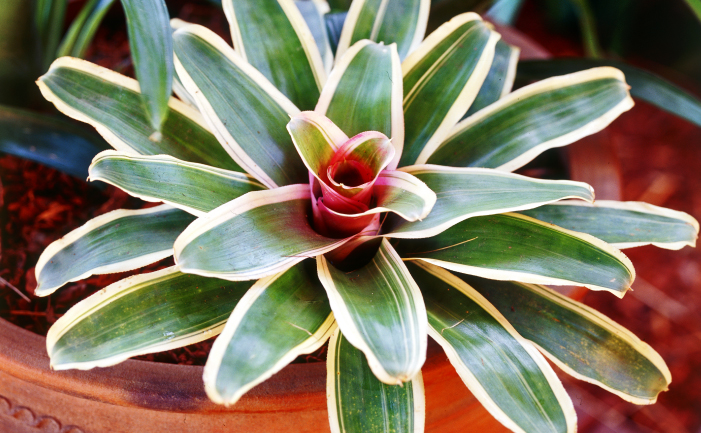 These fascinating tropical American natives come in a wonderful variety of sizes, shapes and foliage colours. They seem very strange and exotic, but one of our most common fruits, the pineapple, is actually a bromeliad. Many bromeliads are epiphytes (ie they live on other plants but do not parasitise those plants), living up in the forks of tree branches and surviving mainly on the moisture and nutrients they obtain from the air. However there are bromeliads for every situation – some make very good indoor plants, while others can be quite spectacular grown in the garden. The Burke’s Backyard Hawaiian Special featured a fabulous bromeliad garden belonging to May Moir.

Don visited a specialist bromeliad nursery and talked to owners Stephanie and Mark Grubski about the main varieties available and how to grow them. Stephanie thinks that there’s no reason Australians can’t use bromeliads in their gardens to achieve the same effects as May Moir does in her Oahu garden.

Stephanie displayed guzmanias, neoregelias and some air plants including Spanish moss (Tillandsia usneoides). Many bromeliads are very colourful but this colour comes from floral leaves or bracts which hold the smaller, less obvious flowers. Many bromeliads colour more vibrantly when the plants are flowering. These are the main bromeliads sold in Australia today:

Aechmea: The plants in this genus are mostly epiphytic. One of the best known is Aechmea fasciata or ‘Silver King’, which has long lasting, pretty pink flowers and is often used as an indoor plant.

Ananas: The commercially grown pineapple, Ananas comosus is a member of this genus.

Billbergia: There are around 60 species of Billbergia, which are colourful and well suited to growing in the garden around the base of trees. They clump up quickly to form good flower displays, although the inflorescence (flower head) on some species is short lived.

Cryptanthus: This is a terrestrial group from Brazil, which needs plenty of room for root development. They are best suited to warm climates.

Vriesea: Plants in this genus have interesting and varied foliage, and sword like eye-catching flowers. They are easy to grow and are good bromeliads for beginners to try.

Tillandsia: True air plants, tillandsias range in size from the tiny T. bryoides (1cm or 0.4″) to the giant T. grandis which can grow up to 3 metres (9′) tall. Also in this group is T. usneoides, commonly known as old man’s whiskers or Spanish moss, which looks like spider webs hanging from the trees. Apart from its ornamental uses, this material can be used for padding in upholstery.

Neoregelias and their many hybrids are very colourful and easy to grow. The inner leaves of many species turn a brilliant reddish colour just before flowering. The most commonly grown species is Neoregelia carolinae, also known as the ‘Blushing Bromeliad’.

Bromeliads are hardy plants which can be grown outdoors in most areas of Australia. They’re also worth a try in mountain regions but they need protection from cold and frost.

Bromeliads grow well in pots. They require a light, open potting mix with good drainage. When potting don’t forget that the leaves hold water, so it’s important to keep the central cup upright. Bromeliads can also be grown in the garden in a well-drained compost on top of the soil. They like warmth and humidity, but must have good air movement. Bromeliads like moist conditions but not too much water. Stephanie says that overwatering kills many plants. For the home gardener division is the easiest method of propagation. Wait until the offsets or pups are about 15cm (6″) in size and cut them away from the mother plant with a sharp knife. Don’t over fertilise – too much fertiliser can kill bromeliads. Don suggests mixing Campbell’s Yellow Orchid Fertiliser at the standard rate for orchids, and spraying to run-off point over the leaves every couple of months. You could also use half-strength Aquasol or Thrive. Aechmea, Neoregelia and Vriesea are good indoor plants, but they need a spell outdoors every now and again when they start to look tired.

Bromeliads are available from most nurseries, or they can be ordered in. They range in price from $10 in a 150mm (6″) pot to $40 in a 300mm (12″) pot. Our segment was filmed at the Bromeliad Garden Nursery, 15 Spurgin Street, Wahroonga, NSW. Phone/fax: (02) 9489 2063. Campbell’s Yellow Orchid Fertiliser is available at nurseries and hardware stores, and costs around $12. There are bromeliad societies and study groups in most states, and some regional groups. To find your nearest group contact: Nancy Pollock, Publicity Officer, Bromeliad Society of Australia. Phone: (02) 4647 8433. An article on bromeliads is featured in the November edition of the Burke’s Backyard magazine, available at newsagents for $4.60. For more information on bromeliads see ‘Growing Bromeliads’ by The Bromeliad Society of Australia, ed. Barry E. Williams (Kangaroo Press, 1990). ISBN: 086 417 3369. Available from all good book stores. RRP $21.80.