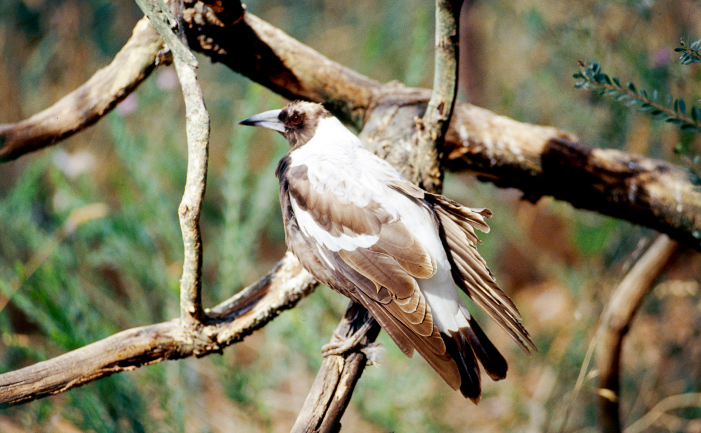 For most of the year magpies are fascinating and endearing native birds. However, during breeding, a small percentage of them can be aggressive, swooping at passers-by in their territory.

Magpies (Gymnorhina tibicen) take their name from an unrelated pied (black and white) European crow. The Australian Magpie is essentially a butcher bird that feeds on the ground. Magpies are found throughout most of Australia and have been introduced to New Zealand.

Australian magpies live for about 20 years, most in territorial groups of between three and 24 birds (groups tend to be smaller in eastern Australia around two to 10 birds).

Each group has a well-organised social strata. Adolescents form flocks with no permanent territory. Within a group which occupies and defends a territory there are usually several females which are nesting and one male who dominates all the others. He mates with any or all of the females during breeding.

Magpies have long powerful feet for walking, running and hopping, a short tail that keeps out of the way while on the ground, a straightened bill for probing and grasping and long, pointed wings for flying over open spaces quickly. The birds leave their nests in the early morning, after carolling to reaffirm territory, and fly to open fields to feed.

The breeding season brings much jockeying for social position and territory. Song battles can occur between neighbouring groups. Subordinate males try to steal matings with females but will not succeed unless they have a territorial patch of their own that includes a tree for nesting.

Females nest on their own, building and incubating unaided. Usually the dominant male is preoccupied with defending the group’s territory and protecting other females.

Several of the females in the group may fail to rear any young as the bird cannot feed herself and incubate the eggs successfully. Even after the eggs hatch, the female looks after brooding and feeding until the young can fly properly.

Once the young reach adolescence they are physically forced to leave the nest and must find their own territory, which can be difficult in the magpie populated suburbs.

Magpies have adapted well to suburban areas and feed and breed in parks, gardens and adjacent bushland. One characteristic of magpie behaviour does not fit well with urban populations. During the breeding season, usually between August and November, magpies can become very aggressive and will swoop and attack passers-by.

Male magpies are mainly, but not exclusively, the attackers. The majority of attacking magpies fly past people from behind, clipping their ear or swooping close to their head. While it is disconcerting, and may frighten young children, little damage is done.

Extremely aggressive magpies may land in front of people, who they view as threatening their nest, to attack them front-on, although this is rare. Magpies are aggressive only during the breeding season when the male is protecting chicks.

The breeding season and associated aggressiveness correlates with the growth of the testes in the male magpie. Their testes become enlarged and testosterone pumps through the male’s body. The rest of the year the testes shrink and testosterone levels are lowered.

What to do:
The best way to avoid being attacked by a magpie is to avoid entering nesting areas while the young are in the nest. If a magpie attacks once, avoid the park or take an alternative route for several weeks (chicks remain in the nest for around four weeks after hatching).

What not to do:
Throwing objects at the birds will only aggravate them further and make them more aggressive. Remember, the bird is defending its young.

Our segment was filmed with magpie expert Darryl Jones of Griffith University in Queensland, who is doing further studies on magpie behaviour.

For further reading on magpies read an excellent article in the spring 1997 issue of Nature Australia magazine. The article titled ‘Dr Jeckyll with Pied Hyde’ is written by Nick Cilento. The magazine is available from newsagents ($8.95).

Nature Australia is also mailed to all members of The Australian Museum Society (TAMS) as a benefit of membership. Other benefits include a discount at the museum shop, access to a range of special activities and a regular newsletter. Annual membership of TAMS is $50 (single), $70 (family), $40 (student and concession). For more information on the society contact TAMS office at the above address. Phone: (02) 9320 6225.

For general information on birds including the Australian magpie consult:

Attracting Birds to your Garden in Australia by John Dengate (New Holland, 1997)