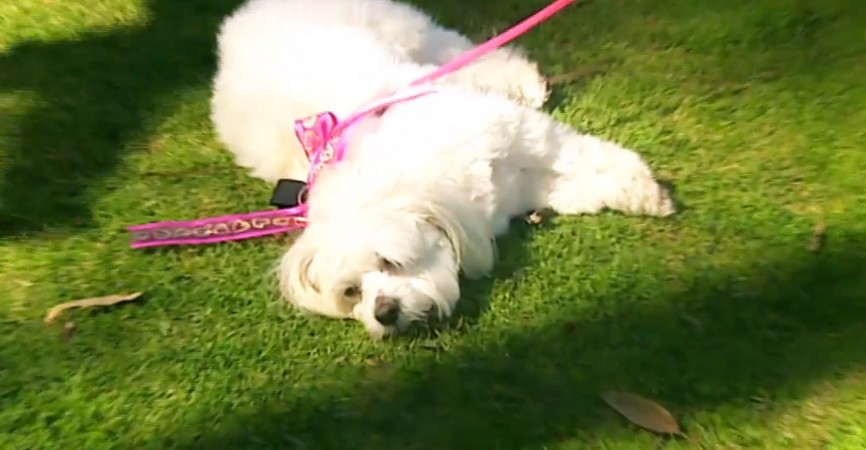 Moody Maltese Dog – a maltese dog slumped on the ground.

Good Evening,
I have a pet enquiry, we have two 7 year old male maltese dogs both brothers to each other. We run an organic vegetable farm and we have backpackers here to do their visas. one of our dogs (bear) is very tempramentle as previous backpackers used to torment the poor thing without our knowledge. one instance was he would be asleep on the bed and they would put their hand under the blanket and scare the crap out of him. he is now very snappy. When you sit down on the couch next to him he will 90% of the time growl and snap at you even if you say his name, tell him what your doing then sit down slowly after he is aware youre there so you dont startle him. he doesnt bite hard but he does bite. If you pat him from his head to his tail, by the time you get to his bottom he will bite (from being scared from behind on the bed). if you walk past him he will snap sometimes and if your sitting at the table eating and go to get up and hes near your feet he will snap too.
I need help to get him out of his aggression and backpackers are afraid of him and bear knows he is boss even though we tell them not to be afraid and how to handle him if he snaps (usually by saying \”No Bear\” and putting him on the floor. please help!

This behaviour amongst Matese Dogs is very common, leading to them being the most dumped (at pounds) dog breed in Australia. These dogs carry a gene known as the Fear-Biting gene – when scared, they bite. Fear biting dogs are estimated to be responsible for about 85% of all serious attacks on humans worldwide.

Curing your dog’s behaviour will be very difficult. Cesar Milan on Foxtel (and in books) details some of his excellent techniques for fixing these dogs, Basically, you need to muzzle the dog during retraining so that you can get on with the job. Then you correct the dog with a sound and a rapid but gentle jab as he BEGINS TO GET READY TO BITE. Muzzling him when he is around the workers is also a good idea.

The stuff about the workers torments causing the problem is not really useful info at all. Dogs live in the moment and traumas like that don’t affect dogs anywhere near as much as they affect us humans. He is a dog, not a person.