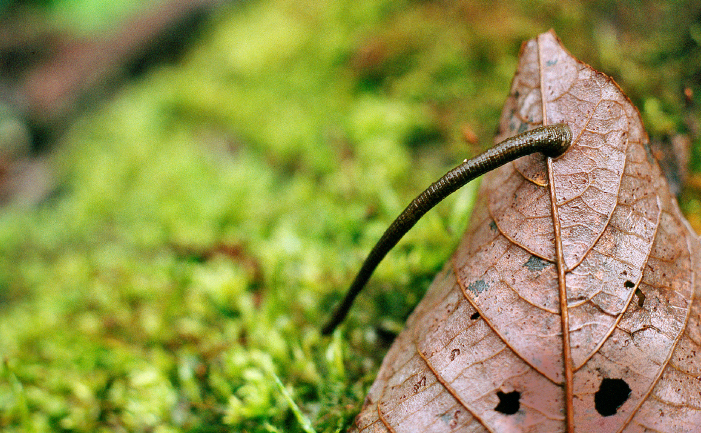 Have you ever felt that shiver crawl up your back after you pull off your sock and there IT is – thick, black, shiny and fattened on your blood? The next repulsive thought is how to get it off.

Leeches didn’t always suffer from such a poor image – in the early-1800s they were used as a cure-all for everything from indigestion to syphilis, with very limited success in either situation.

Leeches find their host by detecting vibrations and heat with tiny sense organs. They have suckers on each end as a means of locomotion, but one end contains a mouth. Once attached to their host they use their saw-like jaws to pierce the skin and suck.

Australia and South-East Asia are the only known places where leeches live on land, usually in wet or moist forests. These are the kinds most likely to attach themselves to you! The bulk of the world’s recorded leech species are aquatic and become attached when paddling in creeks or rivers.

Australia’s known land species are found on the east coast, east of the Great Dividing Range. It is difficult to distinguish land or aquatic leeches by sight alone and many species are brightly coloured and marked. Australia’s land leeches only have two jaws whereas the world’s other species have three jaws.

Leeches contain a component in their saliva which prevents blood from clotting and allows them to have their fill before dropping off. This anticoagulant can cause a wound to bleed slightly after the leech has been detached. It’s said a leech can suck up to 10 times its own body weight in blood.

Unlike ticks, leeches do not burrow into the skin nor will they leave a poisonous head in the wound. Despite this, many myths abound about removing leeches. The simplest way is with salt: a shake onto the body and most will quickly drop off. Tea tree oil or vinegar dabbed onto the body are also effective alternatives. Less queasy victims may prefer to scorch them with cigarettes or lighters. Otherwise, simply pull the little bloodsuckers off!

It is probably a good idea to get a fresh wad of cotton wool and dab a little tea tree oil onto the open wound to prevent infection. While leeches are not known to spread disease, a particular type of bacteria has been identified in their stomachs which may be passed onto the host.

Today leeches are being used to assist in reducing swelling and clotting in some surgical procedures, particularly microsurgery. For example, when reattaching a severed finger tiny blood vessels in the finger can be blocked by clotted blood. Leeches have been used to remove excess blood and their anticoagulant serum allows the blood vessels to flow freely. More research is needed to fully exploit the potential of the leech.

Dr. Noel Tait, a senior lecturer in Biology at Macquarie University was of great assistance in the preparation of our television story on this subject.