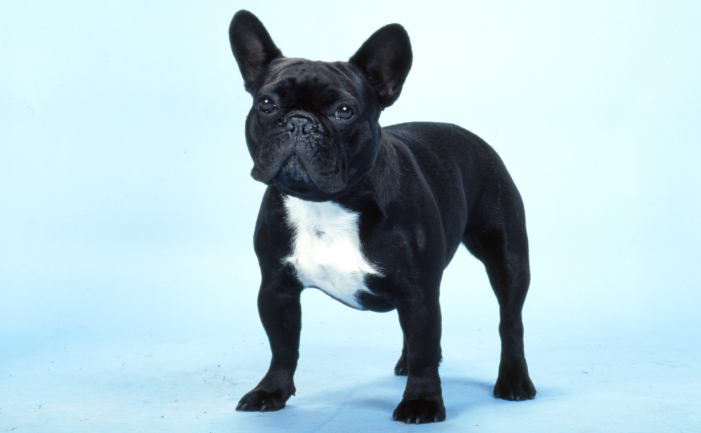 French Bulldogs are a small, stocky dog with a roach (arched) back and compact appearance. Standing around 30 cm (12 inches) in height and weighing 10-15kg (23-33lb), they are similar in size to a Corgi. The face of the ‘Frenchie’ is flattened although said to be less so than the British Bulldog. The biggest difference between the British Bulldog and the French Bulldog is the Frenchie’s ears which stand stiffly upright with the edges curved slightly forward. They are held erect by cartilage which begins to stiffen at 10 days of age.

Colours include brindle (which can have white but is mostly brindle), pied (mostly white), and fawn.

Owners say the French Bulldog is intelligent, courageous and clownish. They are said to be very reliable with children and good watchdogs. Most breeders say they are not yappy dogs and will usually only bark for good reason. This robust little dog will stand its ground if confronted by unfamiliar people.

History of the French Bulldog

There are many conflicting references as to the origin of the French Bulldog. Some breeders claim the origin can be traced to Britain during the advent of the industrial revolution. The theory is that as mechanisation spread, the lacemakers of Nottingham, some of whom had been breeding toy or miniature bulldogs, were pushed out of their jobs. Many left England for Brittany and France where their skills were in demand. They took with them some of these small bulldogs, many of which had bat (upright) ears.

This new style of dog appealed to the French and demand increased so much that breeders began breeding up the ‘French style’ to supply the demand in Paris. The breed became popular in England in the 1900’s and then in America as Americans in Paris fell in love with them and took them home. Breeders say the French Bulldog has been in Australia since the late 1940’s and was developed from imported English bloodlines.

Health and lifespan of the French Bulldog

French Bulldogs do have some potential health problems. Among those to watch is a weakness in the back which can be aggravated by the dog jumping down from furniture, particularly when young. Other potential problems with the breed include luxating patellas (dislocating knee joints) and soft palate problems in some lines. French Bulldogs are very susceptible to overheating and must have shelter and fresh water available at all times. They can experience breathing difficulties in hot weather.

This is not a breed for the inexperienced beginner with caesareans being common if not the norm. Litters can range from 1 to 9 pups but smaller dogs often have smaller litters.

French Bulldogs have been bred as a house/lap dog. They are said to make good house pets, being compact in size, having a quiet demeanour and shedding only small amounts of hair.

French Bulldogs can live happily in a flat with minimal exercise. A daily walk is, however, good to maintain the dog’s fitness. A fenced suburban backyard is ideal. French Bulldogs should not be exercised in the heat of the day. This breed can not swim because of his physique, so care must be taken around swimming pools.

French Bulldogs thrive on human companionship and are not a breed that can be left alone in the backyard. Ideal for retirees, apartment dwellers, families and singles who have time to devote to a dog.

Breeders report that minimal grooming is required. Although the coat rarely sheds, a soft brush or mitten brush will remove loose hairs when moulting.

A companion which is said to be a good watchdog.

French Bulldogs can be described as being only fair in terms of their working and obedience ability.