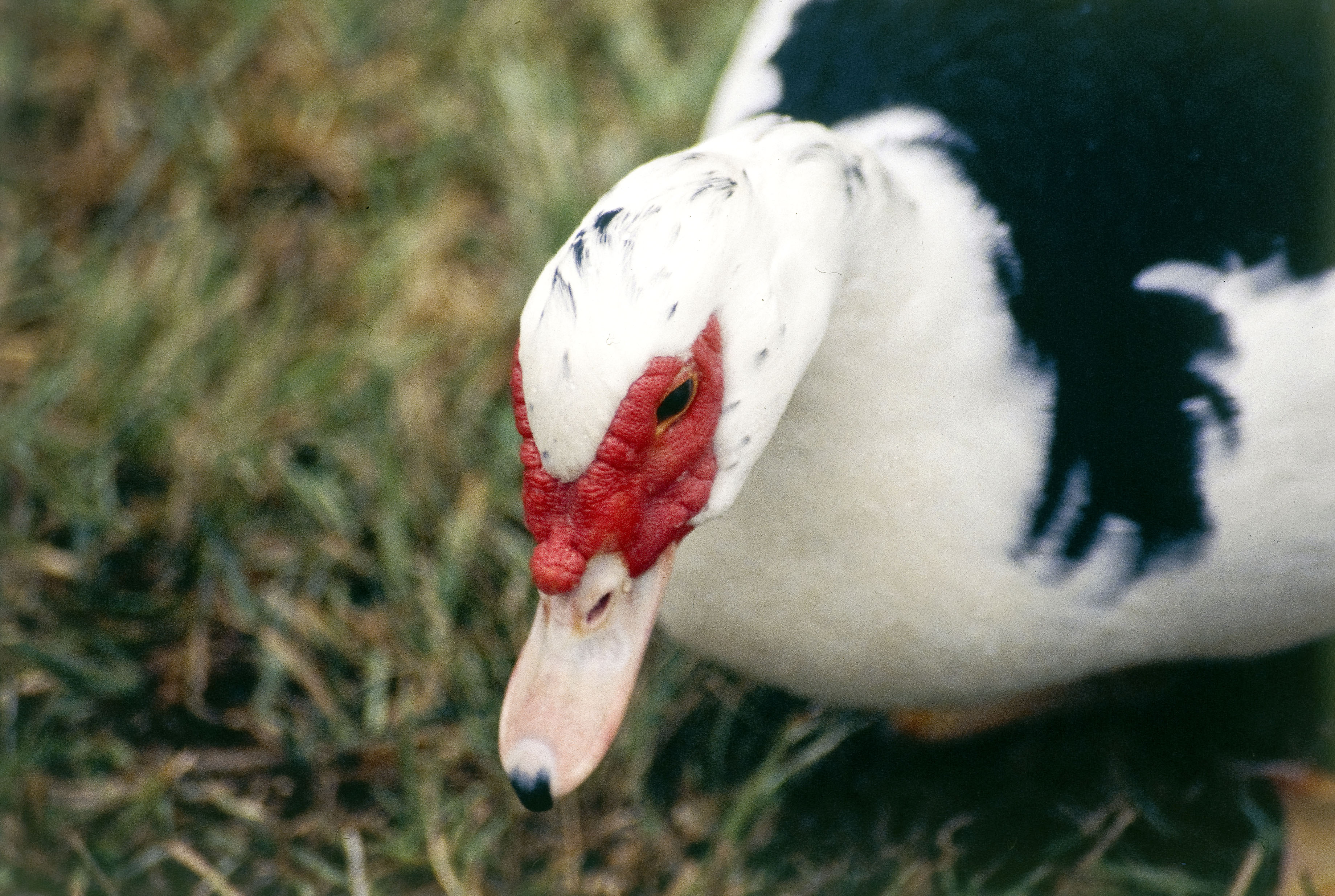 Breed: The Muscovy
Temperament: females make the best pets
Cost: $15 – 25 for adult female, $30 for drakes, $100 for stud Muscovies
Lifespan: 7 to 8 years
Recommended for: anyone wishing to keep ducks
Maintenance: low

Muscovies are the all time versatile pet -they are interesting looking, cheap to run and are also edible. If you have enough of these birds you can make a quilt!

Muscovies are easily distinguished from other breeds by their faces which are devoid of feathers, bright red, flashy and carnunculated (lumpy). The male, when alarmed, excited or angry, will erect the feathers on the top of his head and appear quite leery and wicked.

Male Muscovies are considerably larger than females. Large males weigh as much as eight kilos and females weigh approximately half as much.

White, black and white, blue (a light grey colour) and white, and bronze and white. A fawn and white colour also occurs but is much less common.

Muscovies are docile, placid and slow moving if unthreatened. They do not enjoy being caught and picked up and will squirt their droppings as a form of defense.

Drakes can be bad tempered and aggressive and are not suitable as pets. Drakes will fight together and have been known to kill and even eat ducklings.

Drakes are too heavy to fly but ducks (unlike other domestic breeds) are perfectly capable of flying and perching. Confining them to your own backyard may be achieved either by keeping them in a fully enclosed pen or by clipping the flight feathers on one wing.

The Muscovy is a native South American duck and appears to be the only domestic duck breed which is not a descendant of the Mallard. Muscovy drakes lack the curly tail feathers characteristic of drakes of all other breeds.

The Muscovy belongs to a separate species to other domestic ducks and geese (Cairina moschata). Consequently the progeny which result from crosses between the two groups are sterile.

The name Muscovy is said to be derived from an odour of musk which pervades the skin but which disappears when cooked. Other sources say the Muscovy was named after the Muscovite Trading Company which plied its trade on the South American Coast.

Predators such as foxes and dogs will often make a meal of a duck and so some form of protective fencing or night time housing is essential. If the ducks muddy their pen it may be necessary to place the drinker on wire over a shallow pit.

It is advisable to stay close-by when letting very young ducklings away from shelter as they are susceptible to attack from predators, even during the day.

Muscovies have very few ailments and are hardier than other domestic duck breeds. Care must be taken to provide ducklings with shallow water troughs to prevent them from drowning. Ducklings must also be warm and dry before nightfall or in very cold weather as they have limited ability to restore lost body heat.

Muscovies have a lifespan of 7 to 8 years.

Muscovies should have access to a high quality well balanced feed, specifically formulated for ducks. The nutrient requirements of the Muscovy differ significantly from those of chickens. Duck feed is available from produce stores.

Muscovies are not noticeably enthusiastic about searching for snails but are quite proficient at snapping up insects which come near them. Kitchen scraps and grass clippings should be included in the diet. Ducklings especially, enjoy cabbage leaves, watermelon shells, raw meat and bread and also like to fossick for insects and fresh grass.

Drinking water should be cool and clean – the ducks will quickly muddy their water and, if uncleaned, this can be a source of infection.

A Muscovy duck will lay a clutch of 15 -18 eggs (one per day) and then sit if allowed. Otherwise she will take a break and lay another clutch. The eggs are about one and a half times the size of hen eggs and are equally edible – duck eggs are said to make perfect pavlovas.

Muscovy ducklings, handfed in a domestic situation are not active birds but drakelets if not confined may destroy your garden. Muscovies will graze the lawn a little and will sample succulent greens but two or three ducks in the average backyard are unlikely to cause much damage. Small barriers can be used to protect plants if necessary. Muscovies do not swim much because their oil glands are under developed compared to most ducks.

Drakes do not quack but hiss instead. The duck (female) squeaks with different emphases for different occasions.

Females are useful for egg production. Males are usually fattened for the table – they have more meat on them than other duck breeds. They are ideal for the table around the age of 10 or 12 weeks.

Contact the Royal Agricultural Society in your state for the names of breeders who exhibited birds in recent shows.

YouTube responded with an error: The playlist identified with the request's <code>playlistId</code> parameter cannot be found.