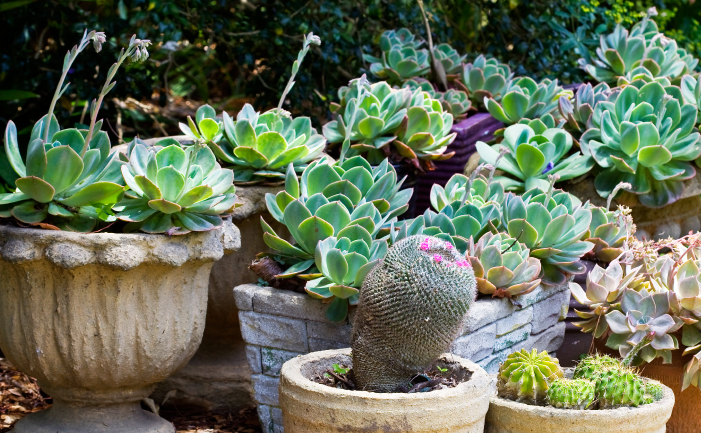 Cacti and other succulents are water-storing plants, so they are ideal for busy people who don’t have much time to spend in the garden watering. Succulents have a number of features, or modifications, which enable them to survive in deserts, on rocks and in the branches of trees. These include: fleshy stems and leaves for water storage spines, thorns and hairs to reduce transpiration light coloured and reflective surfaces to reflect heat.

In our segment Peter Valder looked at the following succulents:

Members of the family Cactaceae vary in appearance, but they all have spines radiating from a hairy or downy centre point. The upright species produce beautiful waterlily-type flowers. They are mostly native to the dry parts of America.

A large genus of succulents that can look like cacti. Their stems contain a milky sap. The flowers are small and green, often with colourful floral leaves or bracts. Many of the spined euphorbias are native to Africa however the best known euphorbia, the poinsettia, is native to Mexico.

A group of succulents from South Africa. Most have thick, spiky leaves and produce tall spikes of tubular, orange flowers.

There are about 300 species in this large genus, and most have succulent leaves.

There are over 2,000 species of bromeliad, many of which are able to hold water in a “well” at the base of the leaves. Many bromeliads have stiff, rosettes of leaves and attractive flower spikes surrounded by colourful bracts. The pineapple is a member of the bromeliad family.

These upright, perennial succulents come from Madagascar and are close relatives of frangipani. The best-known species, P. lamerei, produces beautiful frangipani-like flowers on the stem tips during summer.

In Europe these plants are known as houseleeks, because people thought that they would protect them from fire, evil influences and diseases. They were often planted on the roofs of houses. They have attractive rosettes of leaves and yellow, pink or white star-shaped flowers.

Succulents are easy to grow. They like well-drained soils and a position in sun or part shade. They need to be watered when actively growing (usually spring for cacti and winter for succulents from Africa and Mediterranean areas). They do not need much fertiliser (but apply a slow release fertiliser in spring). In gardens they are often grown as border or rockery plants. Most species come from the warmer parts of the world, but succulents such as sedums and sempervivums do well in cold climates. In humid areas or after prolonged rain, succulents may develop fungal diseases and leaf spots.

Succulents can also be grown in pots. Large succulents (such as agaves or bromeliads) grow well as single plants in a large pot but smaller ground hugging succulents can be mass planted in shallow containers using a gravelly or free draining potting mix (look for mixes specifically designed for succulents).

Succulents are sold at general nurseries but also look for specialist cactus and succulent nurseries in your area.