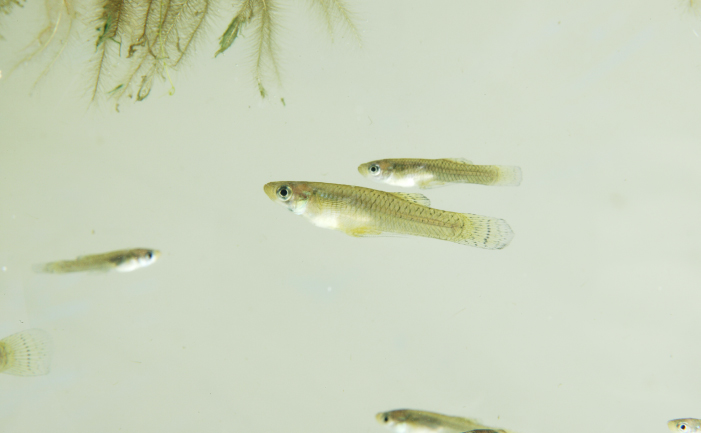 The Eastern Gambusia (Gambusia holbrooki) is native to the rivers draining the Gulf of Mexico, but it has been distributed worldwide to control mosquitoes. It was introduced into Australia in the 1920s, but has not been any more effective at controlling mosquitoes than many of our endemic fish species. In fact, its introduction has proved to be disastrous because mosquito larvae only form a small part of its diet, which includes ants, flies, aquatic beetles, rotifers, crustaceans, molluscs and the eggs and fry of native fish species. Recent studies have also shown that gambusia have a preference for tadpoles over mosquito larvae, and scientists are worried that this is causing a serious decline in amphibian populations around the world.

Gambusia are greenish brown on the back with a silvery white underside. They have large eyes positioned well forward on the body, a flattened dorsal surface and a broad tail for rapid acceleration. The females are much larger than the males. Although some people think they look like guppies, they are not. They are much more dangerous than guppies, which are not found living in the wild.

Why are gambusia so successful?

This species has survived millions of years of competition in North and Central America. It can live in water as cold as 3°C and as hot as 41°C and it can tolerate pollution and salty conditions. It has a very high reproductive rate, with an average of 50 young per brood and up to nine broods per year. The young are born live and they mature quickly. These fish have few predators, except for eels and some birds.

A project to help save this endangered frog has provided solid evidence that gambusia are responsible for the crash in frog numbers. 1,400 Green and Golden Bell Frog tadpoles were released into ponds at Long Reef Golf Course with a view to establishing a new population. Disaster struck when some of the ponds became infested with gambusia. Those ponds support very few frogs and tadpoles, yet the gambusia free ponds still support thriving populations of frogs.

If you want to keep fish in a dam or pond to control mosquitoes, consider using species indigenous to your area. Some native species are actually much better at eating mosquito larvae than gambusia. They include Crimson Spotted Rainbow Fish and Pacific Blue Eyes. Don’t move water, fish or weeds from one water body to another. Without realising it, you could be responsible for serious environmental damage.