Over the years, the names for wild bird colours and varieties has been rather haphazard. Ornithologists used names developed before the science of genetics was actively in use. These names are now obsolete because of developments in the science of genetics.. Most colour names date to 1853 (Frauenfeld) and are based on the Latinised Greek words of science. That is, the same as the confusing scientific names for animals and plants. But in this case, these are now obsolete science.

The name ‘Leucism’ (originating in 1925 by Rensch) has been widely regarded as the most incorrectly used name by birdwatchers. Hein van Grouw stated last year that: “In science this term is still used for mutations causing the absence of melanin-producing cells resulting in white feathers but coloured eyes…but birdwatchers incorrectly use the term for aberrations with pale plumage.”. He also noted in reference to leucism that: “the definition has taken a twist since 1925’, ….resulting in the term Leucism nowadays being often incorrectly used for aberrations in the category Dilution.”

The current soft brown coloured magpie being discussed has exactly that: “washed out colours”. This means that it is not a Leucistic bird at all. And never was. It is best called a dilute. 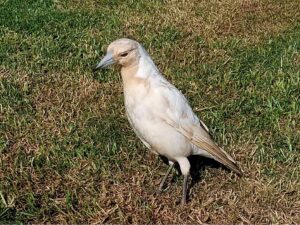 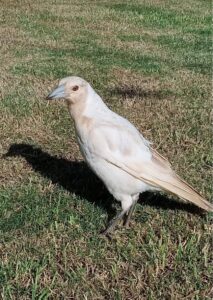 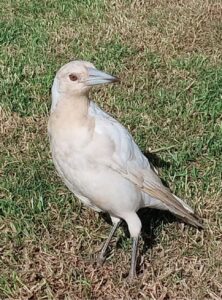 Recent reviews by scientists, still want to use the mixed up pseudo-science jargon that has largely failed us for around 169 years. But surely these should be changed to easily-understood yet far more precise words for Birdwatchers. That is, a handful of common names in English or the language of whatever country is involved.

You could argue that we should base the new names on the existing names of the genes involved. That is, the colour and variety names used in bird breeding clubs etc. Simple, easy to understand and remember. Maybe a mix of names such as dilute, pastel, pied, albino, white, mottled (for the age-related fading), and brown. Then everyone will be on the same page.

Then, we would be free to enjoy the simple pleasures of observing and breeding birds much more easily.